Is the Inner Child the philosophers’ stone?

All posts published here are presented as casual conversation pieces to provoke thought in some direction or another, they do not necessarily represent fixed opinions of the Inner Council, as our work exists beyond the spectrum of bound statement and singular clause.

Is the Inner Child the Philosophers’ Stone?

The first documentation of Lapis Philosophorum or the Philosophers’ Stone in Western Culture was discussed around 300 AD in a compendium of alchemical writings, however there are statements that place the idea of the stone back to Adam who acquired the knowledge of the stone directly from God. Synonymously, there are analogies in Arabic, Buddhist and Hindu texts which describe quite similar properties to that of the Lapis Philosophorum that we read from the alchemist’s cookbooks.

At the core of these common explanations is a white stone (calculus albus) or bright luminous pearl of everlasting incorruptibility that grants immortal divinity to man. There were also medieval allegories in which Christ was adopted for the lapis (the son or Inner Child of god?), and Christ and the Stone were one and the same from the writings of Christian mystics.

There are notes from ninth century alchemical texts quoting from the Alexandrian treatise of Krates, where it is said that a perfect knowledge of the soul enables the adept to understand the many different names which the Philosophers have given to the arcane substance. We see again in the “Liber quartorum” from the Sabians, the philosophic school which flourished in Bagdad till the eleventh century that there must be self-observation in the work as well as of synchronistic events in due time. Indicating a chronological effort of introspection.

One can identify that in general philosophical problems are solved through an insight into the workings of our language, and are resolved, not through the contribution of new knowledge, rather through the arrangement of things long familiar. Thus it appears that the stone’s origin began purely as a spiritually based concept of subjective attainment through meditation. Identified in some cases as divine purity represented by a light that was so high in vibration that it took on a more physical form—something solid and tangible such as a stone. Later on, stories of an actual base ingredient that purified all to gold became the motivation as we drifted out of the metaphysical and into the alchemic physical.

Maggie Hyde mentions in her works on Jung ‘It is likely that the alchemist’s aim was not to produce real material gold but “philosophic” gold. They were concerned not only with the transformation of inanimate matter but with their own spiritual transformation.

So what could be this metaphysical concept that rejuvenates the human soul and allows immortality be?

Could the purity of the Inner Child be the ticket into the deep subjective realms where realisation allows one to overcome the mortal aspects of physical, biological existence?

Have the mythical stories told today that have a child as the centerpiece of the hero’s journey been framed this way to attract an audience of children, or is there something more important being portrayed here?

Were Frodo and Sam the only suitable carriers of the ring’s journey to Mordor as they represent the Inner Child’s purity of heart? 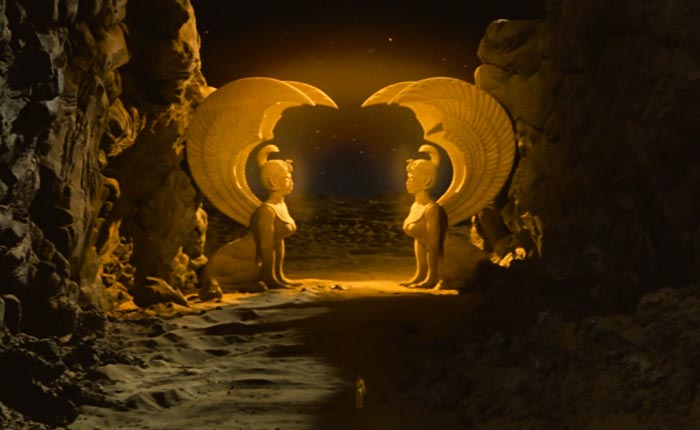 Don’t start to doubt yourself, be confident! The Neverending Story

In Jung’s Archetypes and the Collective Unconscious there is mention of the Invincibility of the child (a child that is born out of the womb of the unconscious) where he states It is a striking paradox in all child myths that the “child” is on the one hand delivered helpless into the power of terrible enemies and in continual danger of extinction, while on the other he possesses powers far exceeding those of ordinary humanity. This is closely related to the psychological fact that though the child may be “insignificant,” unknown, “a mere child,” he is also divine.

The subjective presents a limitless dimension of personal experience and through the cultivation of these realms we are changing the world that we live in and the terms in which we are playing out our lives.

The answer of whether the Inner Child is the Philosophers’ Stone depends upon each individual. Individual interpretation of life does not adhere to collective concepts or group consensus. It is a personal path that one will have to walk alone in order to identify the elixir of life that is the reward waiting at the end of the hero’s journey. Inner Child work is certainly an entrance into this realm and anything is possible if you author yourself to write the subjective journey that lies ahead.

You and your Inner Child are companions and explorers, for without the Inner Child’s purity of heart you will not be able to pass some of the gates that await ahead. These gates are initiations, realisations of responsibility and humility that we pass one by one along our journey of trust into the deep unconscious. Like the journey to Mordor your team will not all be present at the same time, there will be some episodes that have to be completed by the Inner Child alone. Prepare well the trust relationship with your Inner Child. Through the Inner Council we shall recruit our archetypal allies and the adventure ahead depends on you.

Energetic cleaning with the Inner Child

A significant part of The Inner Council’s Inner Child work involves the perception of energy.…

Still many years after Thus Spoke Zarathustra was penned, Nietzsche referred to his novel as…

Loneliness & fear of the dark